Water that is clean, safe, and adequate is essential to human existence. It’s also a critical component of industry and economic development. And yet, the Environmental Protection Agency (EPA) recently announced that 53 percent of river and stream miles, 71 percent of lakes, 80 percent of estuarine square miles, and 98 percent of the Great Lakes shoreline miles in America are classified as ‘impaired.’ Statistics may occasionally be boring…but not this data!

With federal infrastructure funding now available, the construction of water infrastructure projects has begun to escalate rapidly. New treatment plants will be built throughout the country and multi-million-dollar projects to replace outdated and unsafe water distribution pipes are ready to launch.

Citizens and businesses in Jackson, Mississippi in August suffered a harrowing experience when two of the city’s water raw water pumps within a central treatment plant shut down because of flood damage coupled with years of deferred maintenance. The two inoperable pumps immediately triggered a boil water alert but soon Jackson’s entire municipal water system was near the point of collapse.

This scenario is becoming all too common and public officials throughout the country are aggressively assessing the health of water systems. New water treatment plants are expensive to build and there’s no way to complete the job quickly. Delivery of a new plant normally takes about four years because the planning and design work can easily consume two years of that time. 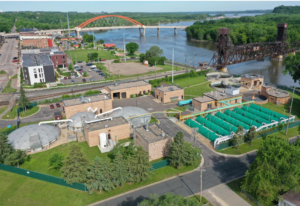 Because the U.S. water infrastructure was built approximately 50 years ago, thousands of water systems are in critical need of renovation, expansion, or replacement. Examples of upcoming projects follow and hundreds more are anticipated soon.

City leaders in Carrollton, Texas plan to launch the second phase of a water treatment plant project that carries a projected cost of between $160 and $170 million. Construction work is not likely to begin until 2024 as planning and design will not be finished until then. Nearby, the city of Dallas also is working on another proposed wastewater interceptor project that will be put out for bids about the same time. This second project will be smaller with a price tag of approximately $46 million.

The city of Wilsonville, Oregon is planning to construct a wastewater treatment plant with a projected cost of $18 million. It will replace an outdated plant that was built in 1971. The new plant will be designed to accommodate growth, new regulation mandates, and alignment with the city’s master plan. The project will incorporate innovative technology and a UV light system for disinfection enhancement.

Public officials in Hastings, Minnesota have announced a $166 million project with construction slated for 2024. The city’s existing wastewater treatment plant will be replaced to meet demand resulting from the region’s growth. Because the plant will be relocated, the effort will include a $13 million conveyance cost along with various types of enhanced technology.

The city of West Lafayette in Indiana is working on a $1.8 billion development agreement with a semiconductor company and that initiative will trigger another large water treatment project. Because the new plant will require 2 million gallons of wastewater per day, the massive economic development effort will hinge on a new water treatment plant which is likely to cost at least $90 million. While there are no published project timelines, the new plant appears to be on a fast track.

A $40 million water plant project has been announced by Volusia County in Florida. Design work is already underway. Construction of the plant, which will be scoped to double the current water reclamation facility, will begin in 2024. It will include upgraded biosolids treatment and new ground storage capabilities.

In Colorado, a new water treatment plant will be constructed to accommodate all cities located in the Uncompahgre River Valley. The project’s cost is projected to be somewhere between $50 million to $70 million. Currently, construction on this project is slated for 2023. This secondary water treatment plant is needed to meet new growth demand and to bolster water resources for the region. It will include new technology and an additional raw water line to ensure drinking water supply to 60,000 citizens residing in the area.

The different funding options for water infrastructure projects are numerous and the timeline for disbursement stretches over the next five years. That ensures that private sector firms offering design work, environmental services, engineering, construction, and water technology will be in high demand throughout the U.S.