Airports among the first to receive federal infrastructure funding 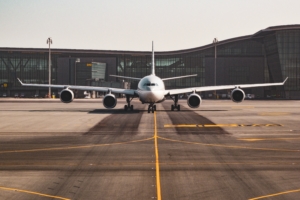 Funding allocations from the $1.2 trillion Bipartisan Infrastructure Law are arriving early for airport improvement projects relative to other federal tranches, and now there is visibility into planned upcoming opportunities throughout the country.

Companies that offer planning and design services are already working on pre-procurement documents. Billions will be spent to upgrade facilities, expand taxiways, construct new terminals, improve lighting and traffic routes, and increase public safety. Several examples of what to expect reflect an influx of upcoming opportunities.

In the state of Washington, numerous airport projects are already underway. Work continues on a $18.6 million project at Spokane International Airport to expand the facility’s west terminal ramp and taxi lane. With additional funding, extra components to the project will be incorporated. New projects will include the construction of a facility for overnight aircraft parking, relocation of existing airport utilities and drainage areas, relocation of a security perimeter, and installation of access control/card reader stations. The project will add more airfield lighting. Snohomish County Airport, also known as Paine Field, will launch a construction project for a new snow removal equipment storage and maintenance facility. The estimated cost of the project is $12.6 million.

O’Hare International Airport in Chicago will begin a procurement late in 2022 for phase two of construction work on a taxiway extension project. This initiative carries a $20 million cost estimate, and the project will be designed to extend and relocate some taxiways while linking others. The project will include demolition of existing pavement and its eventual relocation. Another $10 million is allocated to replace approximately half of the airport’s existing electrical and lighting infrastructure in the Ring Tunnel. Prior to replacing the lighting infrastructure, the tunnel’s exhaust system will also be upgraded with a separate project that has been assigned an estimated cost of somewhere between $10 million and $20 million.

In Alaska, the Ketchikan International Airport will benefit from an $89 million expansion which, when completed, will effectively double its size. City officials have announced an upcoming project designed to expand the airport’s terminal and its commercial and cargo plane capacities. The project, which is designed to accommodate 360,000 passengers annually by 2038, will be divided into phases. Phase one will include relocating the airport’s security checkpoint, adding a new lane to it, expanding the terminal concessions area, adding a second covered jetway, and building a concrete parking area for a third commercial jetliner. Other phases of the effort will launch afterward.

Custer Airport in Monroe, Michigan, has budgeted $280,000 for design work on a runway rehabilitation project. The project will ultimately be assigned a budget of approximately $27.2 million. Other airport expansions and upgrades are emerging at the nearby Detroit Metropolitan Airport as well. The Detroit airport is the state’s largest and one of the top recipients of early funding. The Gerald R. Ford International Airport, Michigan’s second largest airport, will be the site of $32 million in construction work.

An upcoming environmental impact study with a budget of $1.4 million will precede contracting opportunities at the McClellan-Palomar Airport in North San Diego County. When finalized, the study will outline a number of large airport projects. Officials hope to soon launch a $12.5 million improvement effort focused initially on one of the airport’s critical runways. Another project that will carry a $14 million cost estimate will focus on another runway extension initiative.

Charlotte Douglas International Airport has allocated $422 million for work on a multi-phase taxiway project that will include construction, paving, and lighting. One of the airport’s concourses will be expanded to allow an additional 10 gates. Initial scoping of this project carries a $205 million estimate. Another $672 million project will be launched to construct a runway extension.

The Piedmont Triad International Airport in Greensboro, North Carolina, also plans to launch several taxiway expansions soon. One of the initial projects for a new taxiway has been assigned an estimate of at least $15 million.

Officials at the Philadelphia International Airport have plans to launch a major upgrade initiative that will include numerous projects carrying multi-million-dollar cost estimates. Upgrades to existing surfaces of taxiways are of high interest to airport officials.

These few examples of upcoming airport projects are an indication of the types to anticipate at airports of every size throughout the country. Along with the obvious partnering opportunities for engineering and construction firms, demand will be high for companies with other offerings as well. Projects will call for fencing, technology, equipment, furniture, and landscaping. Many airports also will upgrade or reroute traffic lanes and enhance public safety significantly.